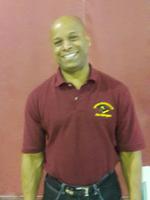 Eric Harrington was born and raised in Philadelphia. He is a graduate of Cardinal Dougherty High School class of 1976. As a star athlete in football and track, Eric decided to pursue a computer science degree at the University of Dayton instead of playing sports. He received his B.S. degree in computer science at the University of Dayton in December 1981.  As a young man growing up in Philadelphia, he always wanted to give something back to the community, especially our young people. It has always been his desire to see his community uplifted through academic and social principles.
After working in the computer field for 30 years, Eric started the non-profit organization Christian Youth Coalition to work with community leaders and the CeaseFire program of Philadelphia for three years to help stop the youth violence in the 22nd police district. After talking with the young people in the neighborhood about the violence that was occurring around them, he found that most of them didn’t finish high school.  Eric was given a vision to start another non-profit organization called, “Revitalization Program of Philadelphia, Inc.” The Revitalization Program of Philadelphia (R.P.O.P.) was birthed in response to President Barack Obama’s State of the Union Address on February 12, 2013.  Its focus is revitalizing the core services in the City of Philadelphia starting with education and jobs by renewing the spirit of hope and reawakening the vision of greatness in our citizenry.  Urban education has been broken for the past decade. It has taken Eric two years to develop a plan of action that will revolutionize urban education starting with Philadelphia. It’s time for a change. The next generation is depending on us to provide a solution to this ongoing problem.

LaSalle Grad, played on the men's basketball team. Born and raised in Texas. Cowboys fan. (Yes I said it)! Works as a supervisor in a juvenile justice facility with over 20 yeras experience. license eligible pending review for LPC in PA. Also, works as ntherapist seeing clients through a psychiatrist private practice. Enjoys sports, travel and reading.

Check out some of the pictures from our recent events.